Grizzly bears are difficult to count—especially in an area as remote as the Yukon—so there have been few field studies on their abundance in the territory.

The number of grizzly bears in Yukon is estimated at 6,000–7,000 bears; however, the number is unknown. This estimate was derived in the 1990s based on biologists’ understanding of how many grizzly bears could be supported in various regions of the Yukon.

A public survey was conducted 2018 by the YFWMB/Dept. of Env to find out beliefs and perceptions of Yukoners on GB.
Outcome: Yukoners value grizzly bears and don’t want them killed.
Read the full survey HERE

Written in 2018 by the Yukon Department of Environment

In 1991, grizzly bear populations in western Canada, including Yukon, were assessed as a species of special concern by the Committee on the Status of Endangered Wildlife in Canada (COSEWIC).

This did not influence the changes to hunting regulations over the years towards the conservation of Grizzly bears. In fact, changes were made that include varying season dates and bag limits from one grizzly bear per lifetime (for non-residents) to one grizzly bear every one to five licence years.

Also, the season length was extended, and bag limits were increased in the Southern Lakes region from 1984 to 2001 to support a moose recovery initiative. This initiative was not based on scientific data proving that grizzly bears were causing moose populations to diminish. These bag limits remain the same today even though now Grizzly bears are listed under SARA and no study has shown that grizzly bears are big predators of moose in the Southern Lake region.

Licensed hunting was closed for cubs and sows with cubs in 1975. A cub includes any bear that is less than three years old.

Sixty-four percent (64%) of those seals were obtained by resident hunters. Based on the 2013 hunter effort survey, 25% of resident hunters with a grizzly bear seal planned to hunt grizzly bears and the remaining 75% obtained a seal in case there was a conflict with a bear.

Most grizzly bear harvest occurred during the fall season. Hunters are encouraged to hunt male bears and 99% of hunters say they preferred to harvest male bears based on the 2013 hunter effort survey. Over all years, 34% of harvested grizzly bears were female. This is a high percentage that might affect the sustainability of a population.

Under the Inuvialuit Final Agreement, Inuvialuit beneficiaries exercise their harvest rights for grizzly bears on the Yukon North Slope. The grizzly bear harvest is by quota and permits are administered by the Aklavik Hunters and Trappers Committee. 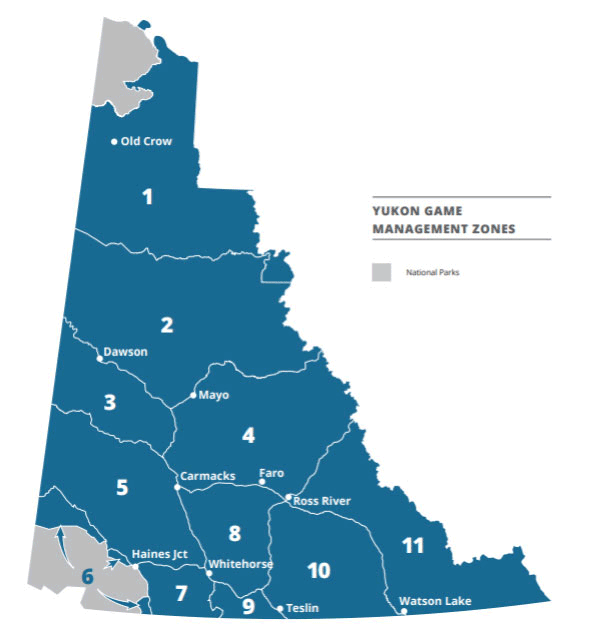 Figures below show the number of grizzly bears harvested by game management zone (GMZ) from 1980 to 2014. Note that zone 6 is not shown because it is closed to grizzly bear hunting:

Data analysis of Grizzly bear mortalities from 2016 to

Because grizzly bears have low productivity, populations grow slowly and they have low resilience to population reductions, which if not reversed, can lead to long-term declines, and, in some cases, local extirpations. Quite simply, when mortality continually exceeds reproduction grizzly bear populations will decline.

Yukon North Slope, 2004 to 2010
Purpose of the study was to study population change, reproductive rate and survival rate.

Conclusion: Population at Yukon North Slope is stable or at carrying capacity and seems to be healthy, due to the fact that there is no human settlement and no hunting pressure.

Note: Lack of data points resulted in a less than determinant estimate. Insufficient adult collaring was completed with only 39 individual sub-adult and adult grizzly bears handled and tracked. Within these 39 bears, three of them were found, dead ‘in-the-field’ from human gunshot wounds, not reported. Another collared bear was killed and buried, later reported. Conclusion: The evidence found supports the findings and statement that “unreported mortality of grizzly bears in the Southern Lake region is likely high”.

Bruce McLellan, ecologist BC Ministry of Forests, and Robert Serrouya, University of Alberta, both independent Biologists, summarized all the research done on Grizzly bears in Yukon. Following are statements coming from their review of the Southern Lakes research completed by Ramona Maraj:

Grizzly Bear populations need to be studied and researched to determine immediate changes to hunting regulations across the Yukon. Grizzly Bears are now a species of concern in Canada and including the Yukon.

* The information gathered above was the result of an ATIPP request to the Yukon Government.

Bear Smart Initiatives by Jurisdiction – A quick comparison of actions taken by governments and other stakeholders to reduce human-bear conflict. 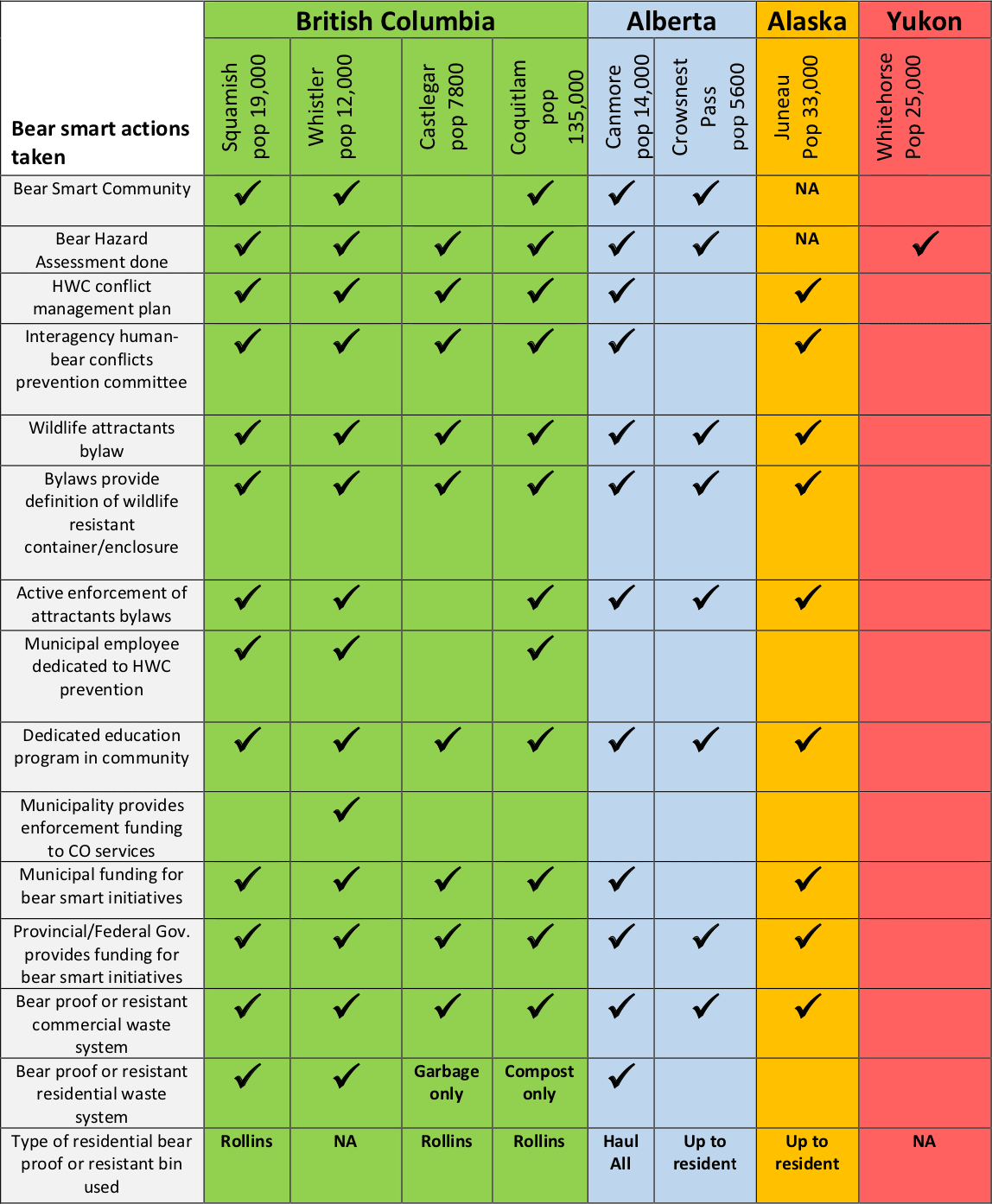 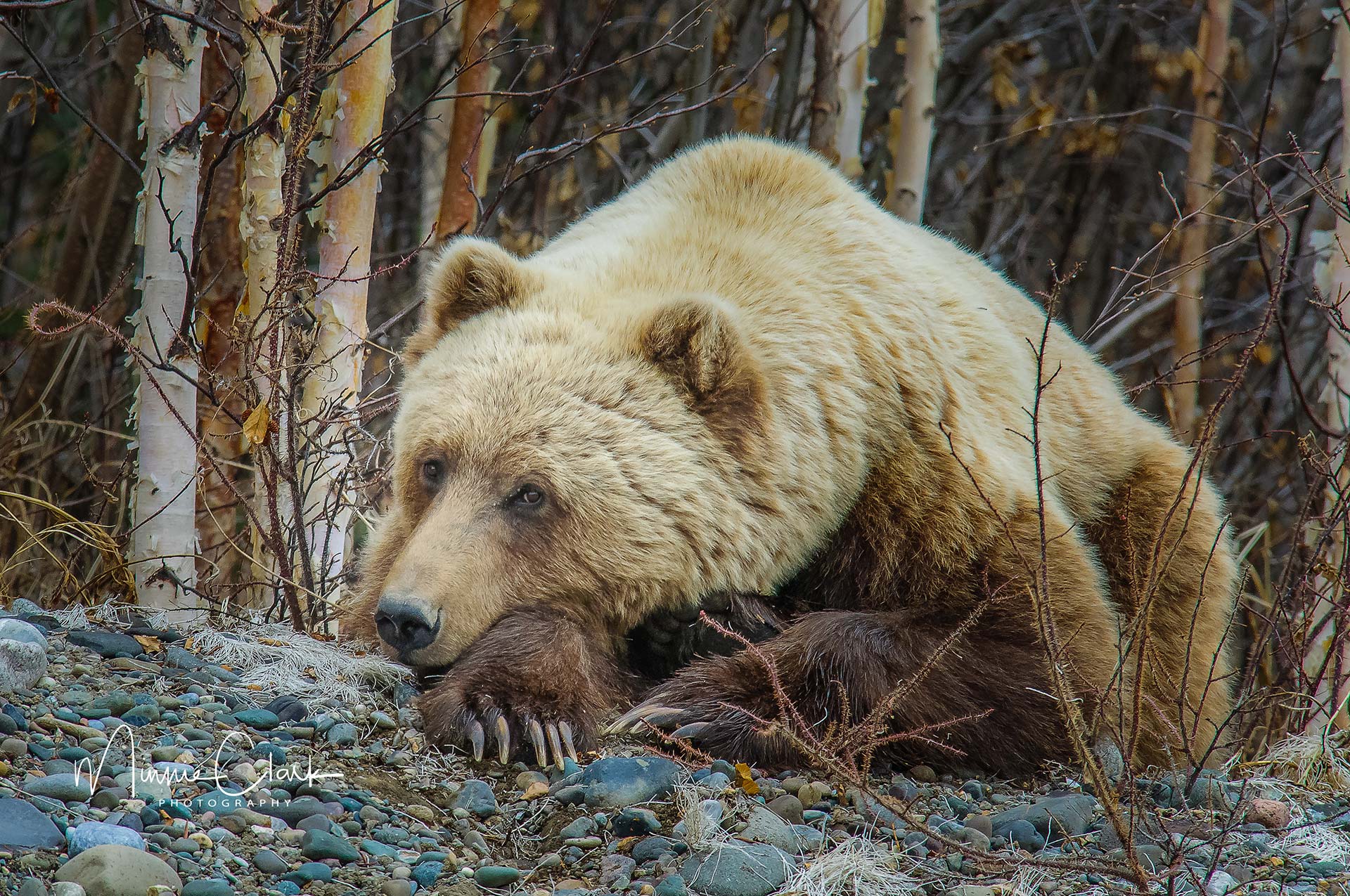