Grizzly bears (Ursus arctos; more widely known as brown bears) were widespread in much of North America, Europe, and Asia; however, they no longer occur across about half of their historical range, and populations at the southern edge of their current range are often small, isolated, and endangered.

Bears are highly evolved social animals with intelligence comparable to that of the great apes.

Bears are highly evolved social animals with intelligence comparable to that of the great apes.

Bears are not as unpredictable and dangerous as Hollywood or the media would have us believe. Bears, if they are understood exhibit predictable behavior. This trait can be beneficial to people who come into contact with bears.

Bears are not mean or malicious; they are very gentle, curious, and tolerant animals. 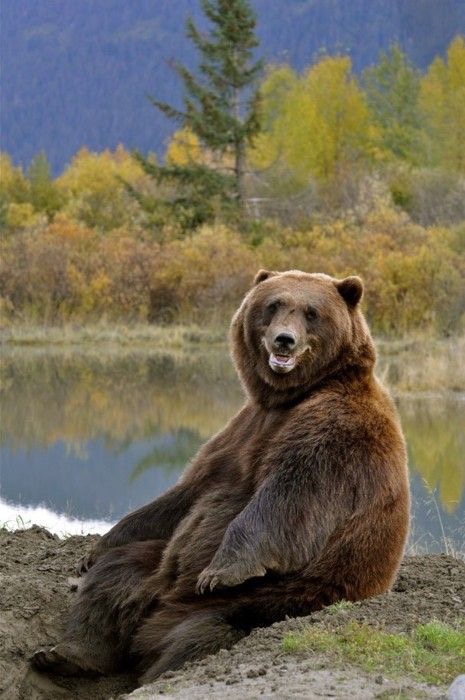 The intelligence of this animal never fails to amaze me. I observed and photographed [a] bear moving a log into place so she could walk across it and get to the other side of a creek without swimming. This was an animal using a tool to accomplish a task – an ability normally accredited to only humans and chimpanzees. Bears are truly amazing. – Bill Lea, Wildlife Photographer as quoted in Masterson, Linda Living with Bears.

Mother bears are affectionate, protective, devoted, strict, sensitive and attentive with their young. Not unlike people, bears can be empathetic, fearful, joyful, playful, social and even altruistic. They’re all individuals and have unique personalities.

Cubs, as well as older bears, engage in social play and have ritualistic mechanisms to meet strangers and decide if they are friendly or not. Bears routinely distinguish between threatening and non-threatening human behaviour.

Bears communicate using body language, sounds and smells. Bears treat humans just as they would other bears; the problem is that bears are very physical with each other, with the intentional use of bites, swats or body posturing.

Bears are beautiful, sentient beings who are extremely large in personality, polite, and even empathetic. They also have a keen sense of community, and are not as solo and independent as people have suggested they are. They are peaceful, thoughtful, emotionally intelligent animals who truly love their kids. They are trustworthy, and that is especially true of a mother and her cubs. They have a jolly sense of humour, curiosity and compassion. ~ Ellie Lamb, Bear Viewing Guide

Bears live in a rich and complex scent-defined world. They depend on their acute sense of smell for information about the world around them. Their smelling ability is extremely sensitive, with one hundred times more nasal mucosa area than a human. A complex system of social messages are communicated through trails of airborne scent; scent transferred to twigs, branches and grasses; and scents left on purpose by tree rubbing or biting, as well as scat or urine marks. In the ursine world, these messages combine to become the daily newspaper.

Bears see in colour and have good vision, similar to humans.

Bears are fast; they can run more than 60 kilometers an hour (37 mph) – that’s twice as fast as an Olympic sprinter. In fact, a bear can outrun a race horse over short distances, but has little endurance. To put their speed in perspective, bears can run 15 meters per second (50 feet per second).

The more I study bears, the more variability I see, and the harder it is to answer questions about them.  Individuals have different personalities, and much of the behavior of these intelligent animals is based on learning. – Dr. Lynn Rogers (Bear Biologist, Founder of North American Bear Center)

Bears are very strong and powerful animals. They have been known to bend open car doors and pry open windshields in their search for food. Bears routinely roll over huge rocks and logs in search of food. A grizzly’s powerful digging ability allows them to feed on roots, bulbs, and rodents, as well as dig dens on steep mountain slopes.

Size, body weight and color vary between species and from habitat to habitat. Learn to identify the difference between blacks and grizzlies.

Message
from a Bear

Grizzly bears are an important aspect of life in the Yukon, and there are probably no people to whom they have played a more significant role than the Indigenous population of the territory. Historically, grizzly bears have featured prominently in the cultural and social underpinnings of Yukon First Nations people for a span of time that predates our modern era, and stretches out to the very beginnings of recorded time. It is fair to say that Yukon Indigenous people have a special relationship to the world of the grizzly bear, one that can be examined by discussing their cultural, historical and economic interrelationships in some detail.

What’s in a name?

Grizzly bears (Ursus arctos) have many different names. Respecting and understanding Indigenous names is an important part of how we should all talk about wildlife.

Below are some of the different names in Indigenous languages from around Yukon for what is known in English as a “grizzly bear” or “brown bear”.

Grizzly bears have the longest reproductive cycle of any North American mammal. What this means is that they do not increase their populations at a very rapid rate, and are therefore vulnerable to the prospect of species decrease, despite their position in nature as a top predator. Ecologically, the fact that they are not threatened by any other large mammals, save humans, minimizes the need for a high birth rate. This also, however, has contributed to their becoming a species at risk.

Over the course of a ten-year period, a male and female grizzly could count on producing a maximum of eight offspring under the best of conditions. In the real world, the best of conditions often don’t apply, and by way of comparison, a pair of white-tailed deer will give birth to approximately 1,400 offspring in the same time period. The process of grizzly bear reproduction can well be considered as one of nature’s miracles. The biological reality is that it can take a grizzly female five to eight years to attain sexual maturity and be ready to produce offspring.

It is common for a female grizzly to mate with a number of suitors during the peak mating months of May and June. If the female grizzly does become pregnant however, that is not the end of the story. She goes about the business of eating as much as she can in the way of berries, roots, salmon and small mammals, for she is in a race against time to put on as much weight as possible, in preparation for the twin challenges of pregnancy and winter hibernation.

Hibernation is inevitable, but birth is not. As fall and winter approach, if the female grizzly has not gained at least a 20% increase in her body weight, then the prospect of giving birth is a non-starter. Incredibly, the fertilized eggs that are already attached to her uterine wall will be reabsorbed back into her body, if she has not put on the sufficient amount of weight necessary for the next step in the process.

If she has, then the eggs will continue the fertilization and gestation stage, while she finds a suitable den to support her during the winter months. Technically, grizzlies do not undergo a true hibernation, but a deep state of torpor, during which many bodily functions cease during the coldest months. Although they can be easily awakened, there is no defecation or urination, and the bear’s heart rate slows down to about eight beats per minute. There may be a loss of up to one quarter of a bear’s total body weight over the hibernation period, and up to four thousand calories of energy may be expended daily , just in the process of staying alive and not freezing during the winter months.

If The mother bear is fat enough to support it, birth will happen, usually around February when she is still hibernating. One or two cubs, about the size of a teacup, are common, but there may be as many as three. Nursed during their mother’s sleep and weighing only a few ounces each, the cubs ar blind at birth, and will remain so for the first few weeks of their lives. Luckily, milk from the mother grizzly, their only sustenance, is much richer than human milk, and will foster their rapid growth through to spring.

Around April, when the cubs emerge from their den alongside their mother, it’s quickly apparent that her gorging on summer food sources has truly paid off. The cubs have now grown to the size of small house cats, and are eager to explore their new environment. Grizzly cubs are most likely to face mortality within their first year of existence, and while she is nursing her cubs during their first couple of years of life , the mother bear is deeply attached to them. She will defend them with her life if she perceives they are being attacked, and their welfare comes first in her priorities. She will have no interest in mating while they are growing, no matter how many mature males pursue her.

Male grizzlies play no role in the rearing of their offspring. The males remain a solitary species, and will often have no hesitation in warding off females around food sources they may be competing for, such as salmon runs.

To the extent that grizzlies group themselves in what we would consider a society, it’s fair to characterize it as a matriarchal one. 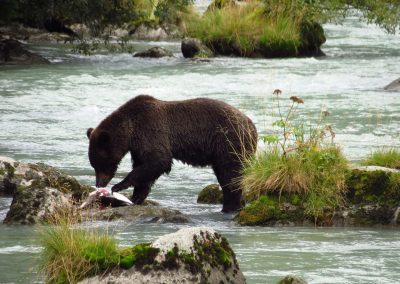 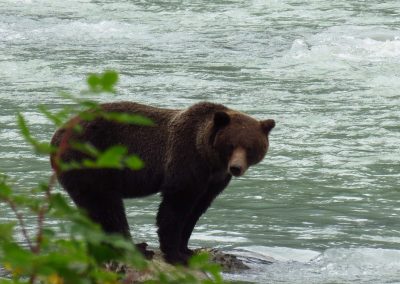 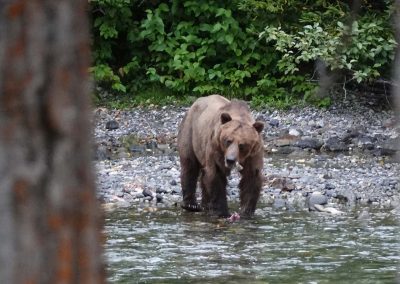 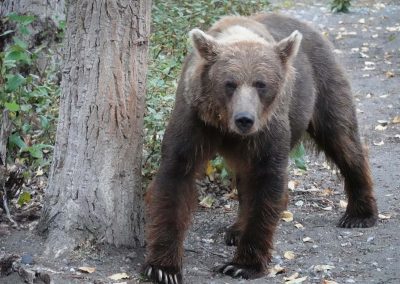 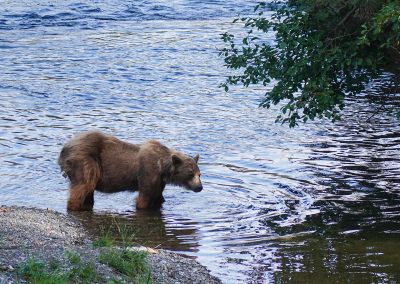 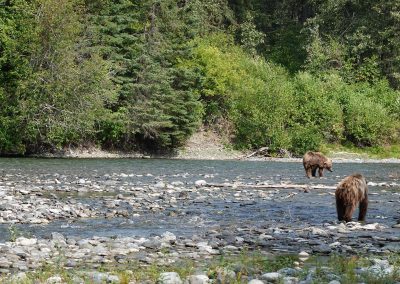 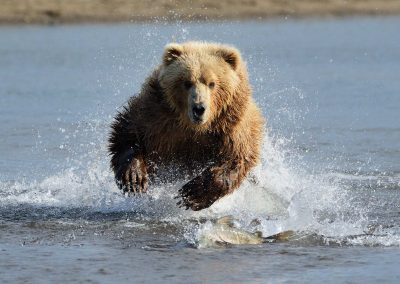 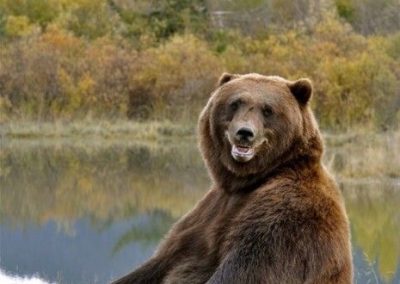 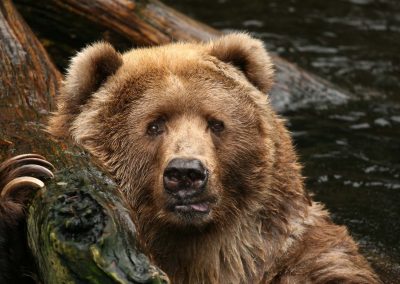 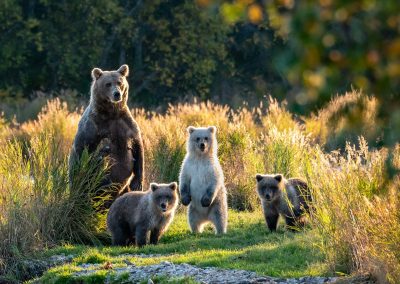